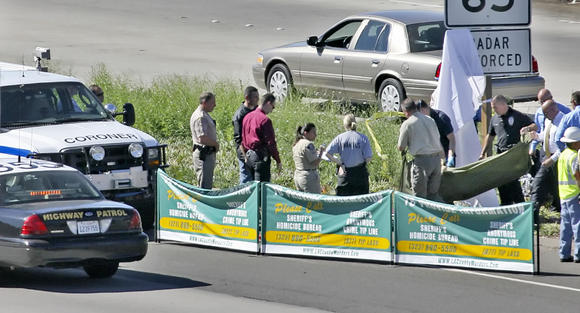 Two men were convicted this week in the 2008 murder of a Mongols Motorcycle Club member gunned down while riding on the Glendale (2) Freeway in 2008. Pictured is the L.A. County Coroner's personnel moving the victim's body on October 8, 2008. (Roger Wilson / Staff Photographer / March 13, 2014)

Suspects are convicted of 2008 shooting of motorcycle gang member.
Two men were convicted this week in the 2008 murder of a Mongols Motorcycle Club member gunned down while riding on the Glendale (2) Freeway.

Jurors on Wednesday found Richard Clayborne, 40, and Jose Gonzalez, 36, guilty of killing 30-year-old Venice resident Manuel Martin, who suffered a gunshot wound to his chest on Oct. 8, 2008 as he rode alongside another motorcyclist, authorities said.

Clayborne and Gonzalez were also found guilty of trying to kill the other motorcyclist, Ronald Hamburg, said Ricardo Santiago, a spokesman for the Los Angeles County district attorney’s office.

Martin and Hamburg had been at the now-shuttered the Mix bar in the 2600 block of Honolulu Avenue with Clayborne and Gonzalez before the shooting, authorities said.

Clayborne and Gonzalez got into a vehicle and followed Martin and Hamburg, who were riding motorcycles, about 2 a.m. from the eastbound Foothill (210) Freeway transition to the southbound 2 Freeway, according to Glendale police spokeswoman Tahnee Lightfoot.

The pair fired shots at the motorcyclists, she added.

That same month, the Bureau of Alcohol, Tobacco, Firearms and Explosives arrested dozens of members of the motorcycle gang during a raid dubbed “Operation Black Rain” stemming from a racketeering indictment accusing them of murder, assault, firearms violations, money laundering and drug trafficking.

The motorcycle gang was established in 1969 in Montebello.

In a 2009, Los Angeles and Glendale police arrested 20 members of the Glendale-based Toonerville gang in connection with four murders, including Martin’s death.

At the time, police said an investigation into Toonerville gang members sbegan when Glendale detectives were looking into Martin’s death.

But police did not release the suspected shooter’s name because he had not been arrested and charged with Martin’s murder.

The pair was also convicted of shooting at Martin and Hamburg from a vehicle and possessing a firearm with priors, authorities said.

They are scheduled to be sentenced April 16 in the downtown Los Angeles County Superior Court.