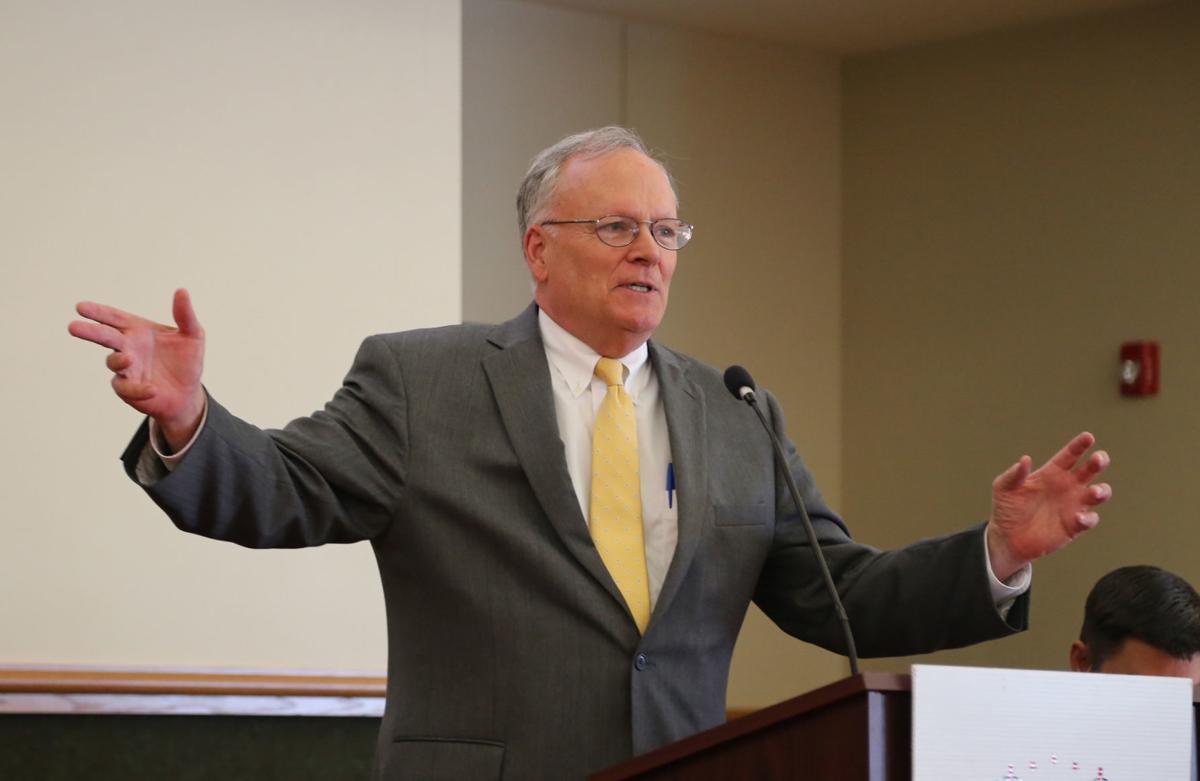 McLennan County District Attorney Barry Johnson, seen here speaking during a recent Republican Club meeting, announced Tuesday that he will dismiss the remaining 24 criminal cases related to the May 2015 Twin Peaks shootout that left nine dead and 20 injured. The only trial related to the shootout ended in a mistrial when the jury was unable to reach a verdict.

Bikers wait outside the Twin Peaks restaurant in Waco after the May 17, 2015, shootout that left nine dead and 20 injured. Prosecutors announced Tuesday that they are dismissing the remaining 24 cases brought after the shootout. 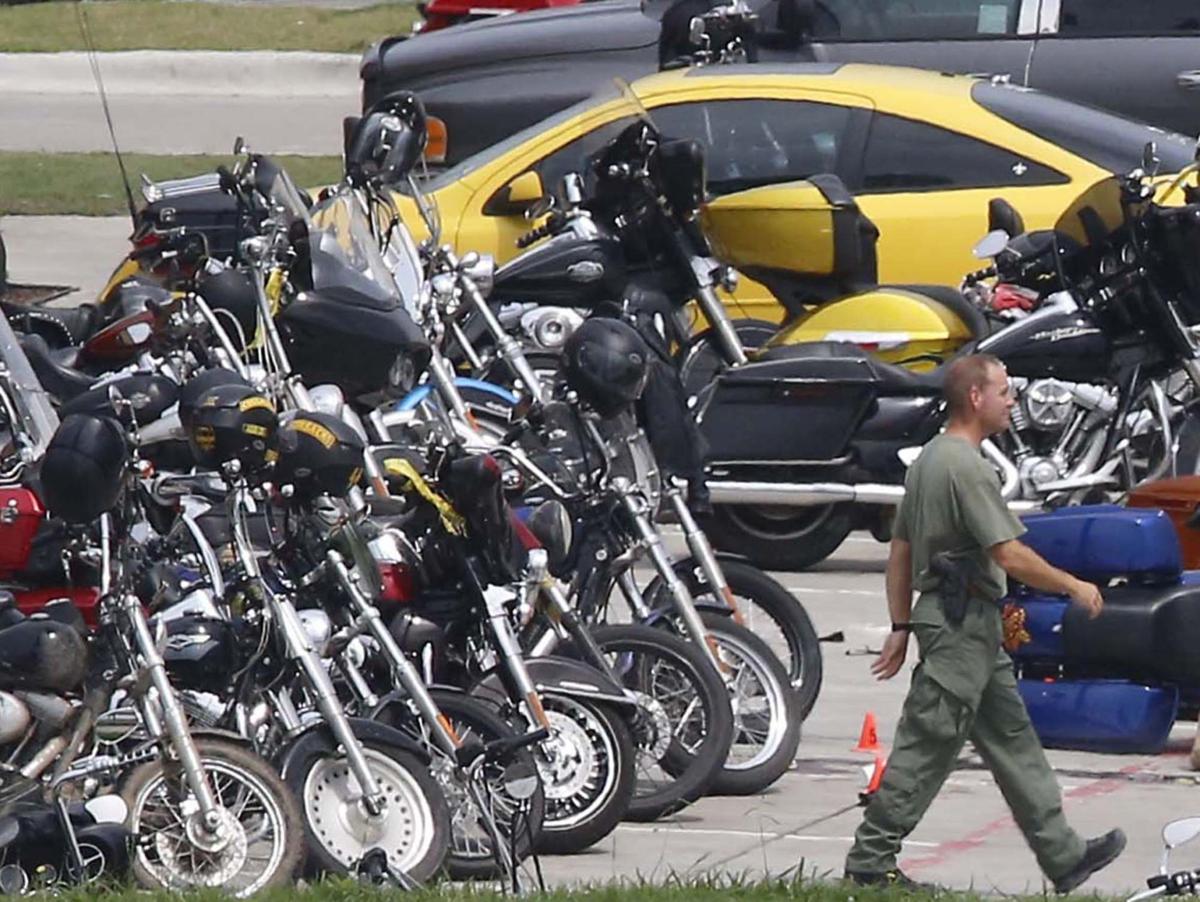 A law enforcement officer walks past a row of motorcycles left in the parking lot of the Twin Peaks restaurant. 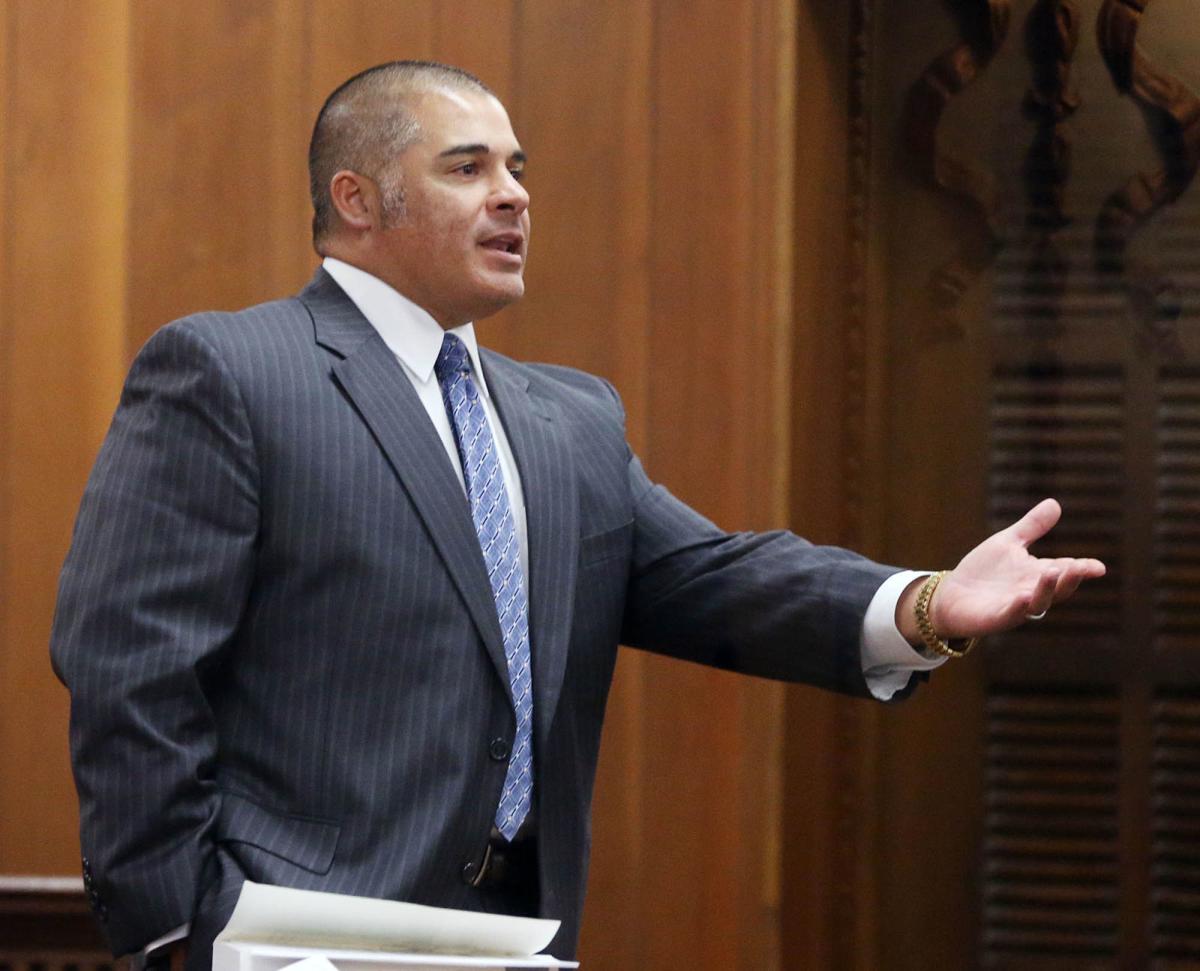 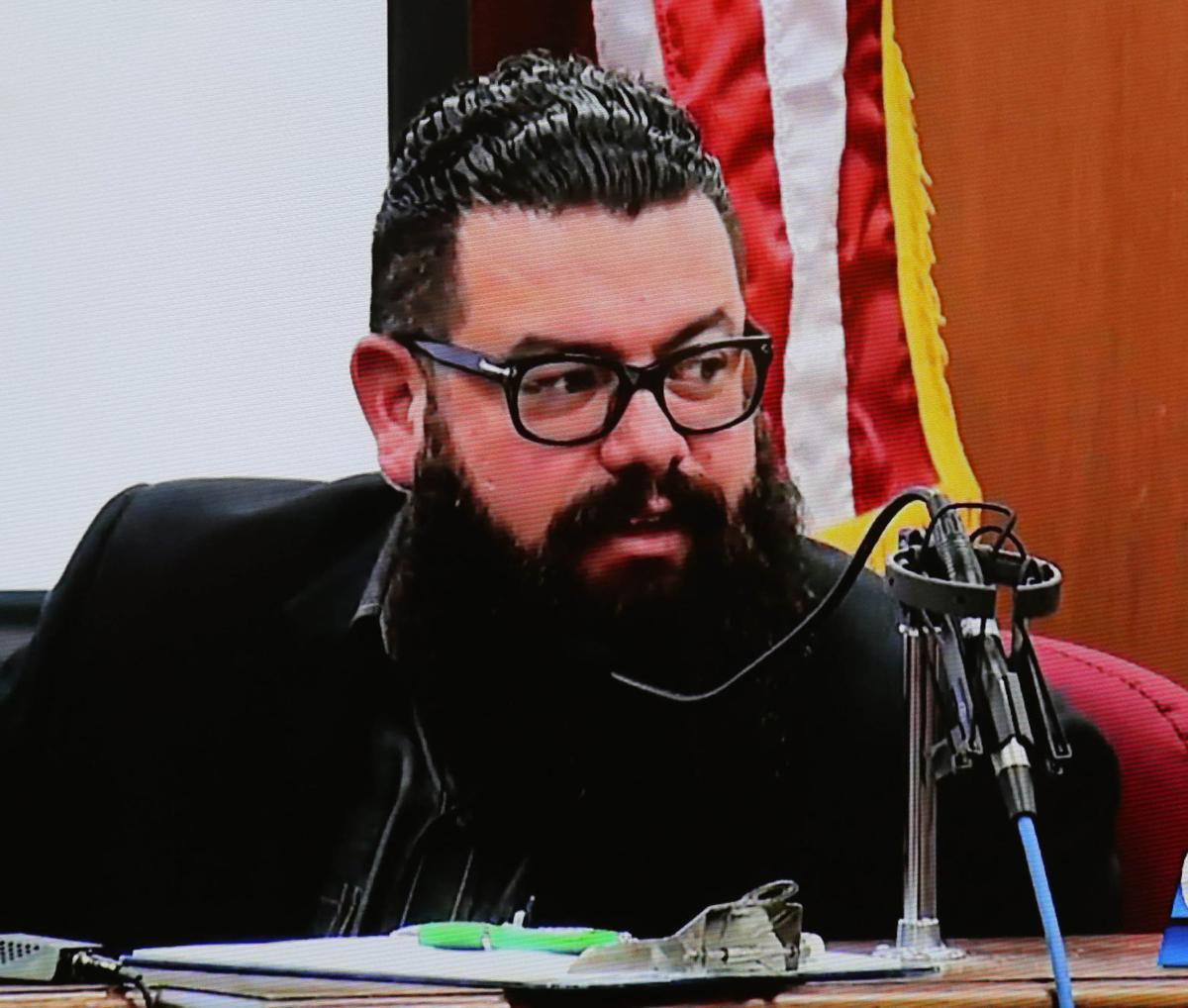 Jacob Carrizal, seen on a courthouse video screen testifying during his trial, is the only Twin Peaks defendant whose case made it to trial. It ended in a mistrial because jurors were unable to reach a verdict.

On May 17, 2015, nine people were killed and more than 20 injured when a melee broke out between biker groups at the Twin Peaks restaurant in Waco. A shootout between two warring groups — the Cossacks and the Bandidos — started just after noon on a Sunday in the parking lot at Central Texas Marketplace. Law enforcement officials knew of trouble brewing between the bikers and had a visible presence around the restaurant, engaging some with gunfire when the fighting started. Attorneys involved in the case credited Waco officers’ actions with preventing further injuries or loss of life. In all, 177 bikers were arrested at the scene and charged with engaging in organized criminal activity. They were held on $1 million bonds, many of which were later reduced. Only one biker stood trial, ending in a mistrial in November 2017 when the jury was unable to reach a consensus on the charges against Jacob Carrizal, 35, who had been president of the Dallas Bandidos chapter. He was tried on charges of directing the activities of a criminal street gang and two counts of engaging in organized criminal activity with the underlying offenses of murder and aggravated assault. In April 2019, all remaining charges associated with bikers at the shootout were dropped.

All remaining criminal cases will be dismissed from the 2015 Twin Peaks biker shootout that left nine dead and 20 injured, prosecutors said Tuesday, ending a four-year prosecutorial fiasco that resulted in zero convictions.

McLennan County District Attorney Barry Johnson said he will dismiss the remaining 24 criminal cases to “end this nightmare that we have been dealing with in this county since May 17, 2015.”

Johnson’s decision means no one will be held accountable for killing or injuring bikers or for engaging in a chaotic battle in a shopping center parking lot in front of a Sunday lunchtime crowd.

“There were nine people who were killed on that fateful day in Waco, Texas, and 20 injured, all of whom were members of rival motorcycle clubs/gangs, and the loss of life is a difficult thing,” Johnson said. “But after looking over the 24 cases we were left with, it is my opinion as your district attorney that we are not able to prosecute any of those cases and reach our burden of proof beyond a reasonable doubt.”

Johnson inherited the Twin Peaks cases when he took office in January, and said he has spent 75 percent of his time since then with a team of prosecutors and investigators trying to determine how to resolve the remaining cases.

About 200 bikers were arrested after the shootout on identical charges of engaging in organized criminal activity and held on $1 million bonds each. Former McLennan County District Attorney Abel Reyna sought indictments against 155 bikers on those identical charges and chose to try Jacob Carrizal, the Bandidos Dallas County chapter president, first.

Carrizal’s case, tried in Waco’s 54th State District Court, ended in mistrial in November 2017, with most of the jurors in his case favoring acquittal. No other defendant has been tried since.

Johnson’s campaign hammered Reyna for his handling of the Twin Peaks cases, and he won the March 2018 Republican primary by 20 percentage points. After the primary, Reyna dismissed all but 24 of the remaining Twin Peaks cases.

The special prosecutors appointed to handle four cases in which Reyna recused his office dismissed those cases by early this year. One of the prosecutors called Reyna’s mass prosecution strategy a “harebrained scheme” that was “patently offensive.”

Reyna’s office re-indicted the remaining two dozen, mostly on riot charges. Other charges that may have been possible arising out of the melee, such as attempted murder, aggravated assault or felon in possession of a firearm, were barred by three-year statutes of limitation before Johnson took office, Johnson said.

“Following the indictments, the prior district attorney had the time and opportunity to review and assess the admissible evidence to determine the full range of charges that could be brought against each individual who participated in the Twin Peaks brawl, and to charge only those offenses where the admissible evidence would support a verdict of guilt beyond a reasonable doubt,” Johnson said in a statement.

“In my opinion, had this action been taken in a timely manner, it would have, and should have, resulted in numerous convictions and prison sentences against many of those who participated in the Twin Peaks brawl. Over the next three years the prior district attorney failed to take that action, for reasons that I do not know to this day,” he said.

“I absolutely disagree with the overall result as well as several statements and accusations within Mr. Johnson’s press release,” Reyna said. “However, it is solely his decision on how to proceed with any case in the district attorney’s office. I respect the fact that the voters of McLennan County chose Mr. Johnson to make these types of decisions.”

Judge Ralph Strother of Waco’s 19th State District Court put a halt to all Twin Peaks proceedings in his courtroom after Reyna’s defeat, saying he wanted to give Johnson a chance to come in and evaluate the cases.

“I’m not shedding any tears today that all of this is finally over,” Strother said of the Twin Peaks criminal saga.

Carrizal is among those whose cases are to be dismissed. Johnson said his trial cost $1 million in preparation and trial costs, plus an additional $500,000 in security and overtime pay after county officials ratcheted up security for his trial.

“To open that Pandora’s box back up and start down that road again when we don’t feel that, after looking at the facts and the evidence, that we would be able to meet our burden of beyond a reasonable doubt would be irresponsible, in my opinion,” Johnson said. “Therefore, I am making the decision now to end this nightmare that we have been dealing with in this county since May 17, 2015.”

For Houston attorney Paul Looney, Tuesday was a “very emotional day.” He said he feels relieved because he sometimes felt that defense attorneys for the bikers were the only ones standing between them and a flawed system Looney says took away their lives, their liberties, their families and, in many cases, their livelihoods.

Looney represented six Twin Peaks defendants over the years, including Marcus Pilkington, a Bandido from Mexia whose Twin Peaks case is set to be dismissed but who is in prison on unrelated charges.

Jarrett did not return a phone message Tuesday.

While the criminal cases will be dismissed, more than 130 of the bikers have civil rights lawsuits pending against Reyna, former Waco Police Chief Brent Stroman, the city of Waco, McLennan County and individual local and state officers who were involved in the arrests.

Dallas attorney Don Tittle represents about 120 of the bikers in their civil lawsuits.

“Maybe if law enforcement had stuck with the original plan to focus on individuals who might have been involved in the violence and let the rest of the motorcyclists go after being interviewed, things would have gone differently,” Tittle said. “It’s hard to imagine that turning the operation into a dragnet wasn’t a major distraction for the investigation, not to mention a public that grew increasingly skeptical as this thing played out. All this for an ill-advised attempt to prove an imaginary conspiracy theory, which to this day there’s not a shred of evidence to support.”

Clint Broden, the Dallas attorney who initially led the attack on the actions of Reyna’s office, Waco police and Justice of the Peace Pete Peterson in the wake of the mass arrests, said Tuesday was a “day of reckoning.”

“Today ends a sad chapter that, unfortunately, is three years too late in coming,” Broden said. “Abel Reyna ruined lives, but I don’t think that, even today, he appreciates the total havoc he caused. I applaud Mr. Johnson for finally ending this cloud that was hanging over Waco.

“It should be remembered, however, that Justice of the Peace Pete Peterson set million-dollar bonds for these cases that were ultimately dismissed. As a result, 170 people spent three more weeks in jail. Judge Peterson and Abel Reyna should be absolutely ashamed of themselves,” Broden said.

Bandidos whose cases will be dismissed include:

Cossacks with cases set for dismissal include:

Others whose cases will be dismissed include:

The anxiety was etched across Marty Lewis’ face as he emerged from the Waco Police Department.

The span of three years has not brought clear answers to the basic questions of the Twin Peaks shootout: Why did it happen? Why did it happen at a crowded suburban shopping center in Waco while patrons were enjoying a leisurely Sunday lunch?

Speculation about the financial hit McLennan County could endure as a result of the May 17, 2015, Twin Peaks biker melee has ranged from minim…

Welcome to the discussion.

Keep it Clean. Please avoid obscene, vulgar, lewd, racist or sexually-oriented language.
PLEASE TURN OFF YOUR CAPS LOCK.
Don't Threaten. Threats of harming another person will not be tolerated.
Be Truthful. Don't knowingly lie about anyone or anything.
Be Nice. No racism, sexism or any sort of -ism that is degrading to another person.
Be Proactive. Use the 'Report' link on each comment to let us know of abusive posts.
Share with Us. We'd love to hear eyewitness accounts, the history behind an article.

Get up-to-the-minute news sent straight to your device.