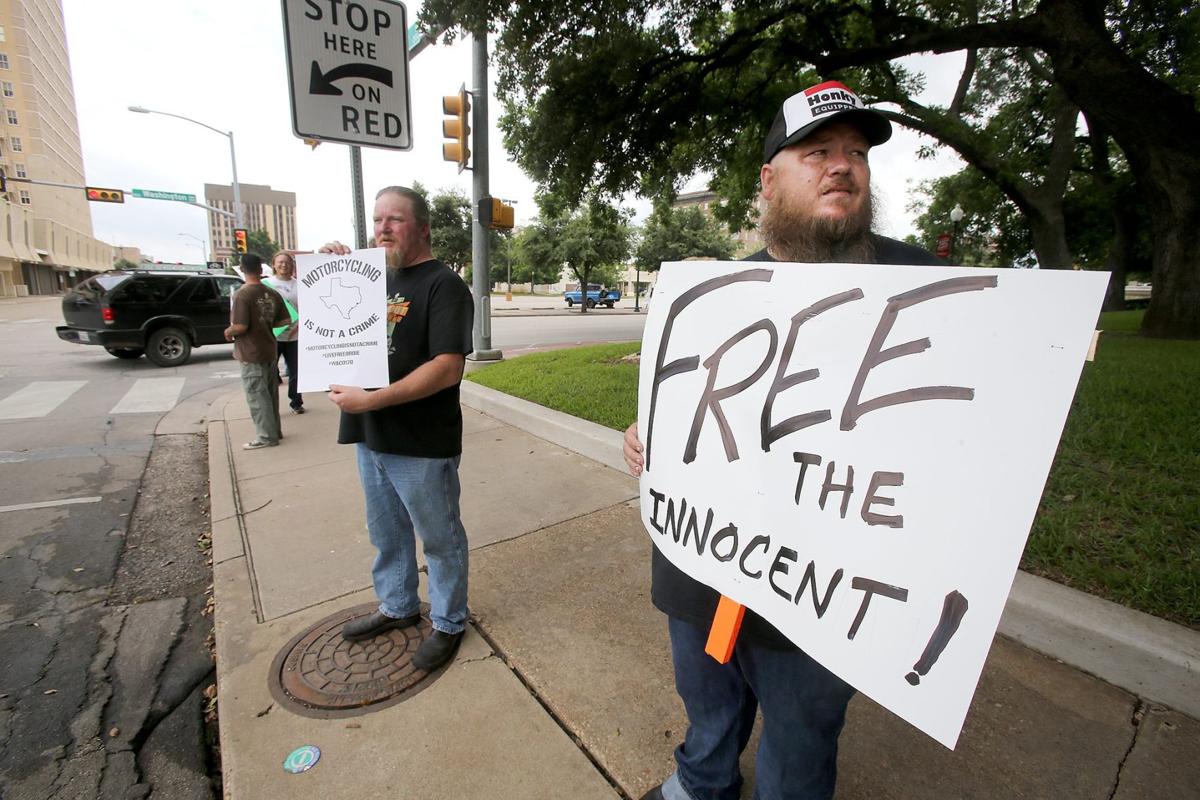 Scott Fultz, from the Houston area, stands with others outside the McLennan County Courthouse supporting the approximately 170 bikers who were arrested in the Twin Peaks shootings. 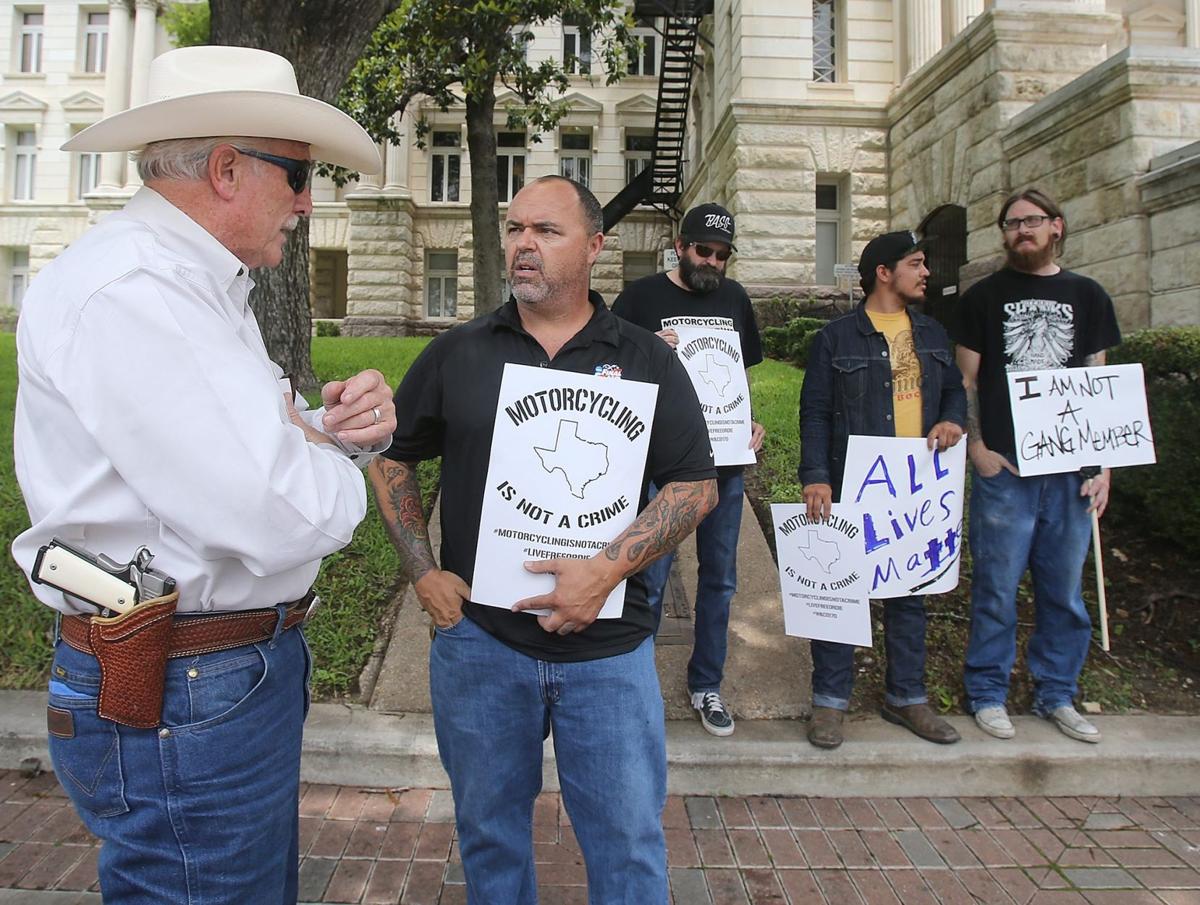 McLennan County sheriff Parnell McNamara (left) has a friendly conversation with Ferrell Surette, from the Houston area, as Surette stands with others outside the McLennan County Courthouse supporting the approximately 170 bikers who were arrested in the Twin Peaks shootings. 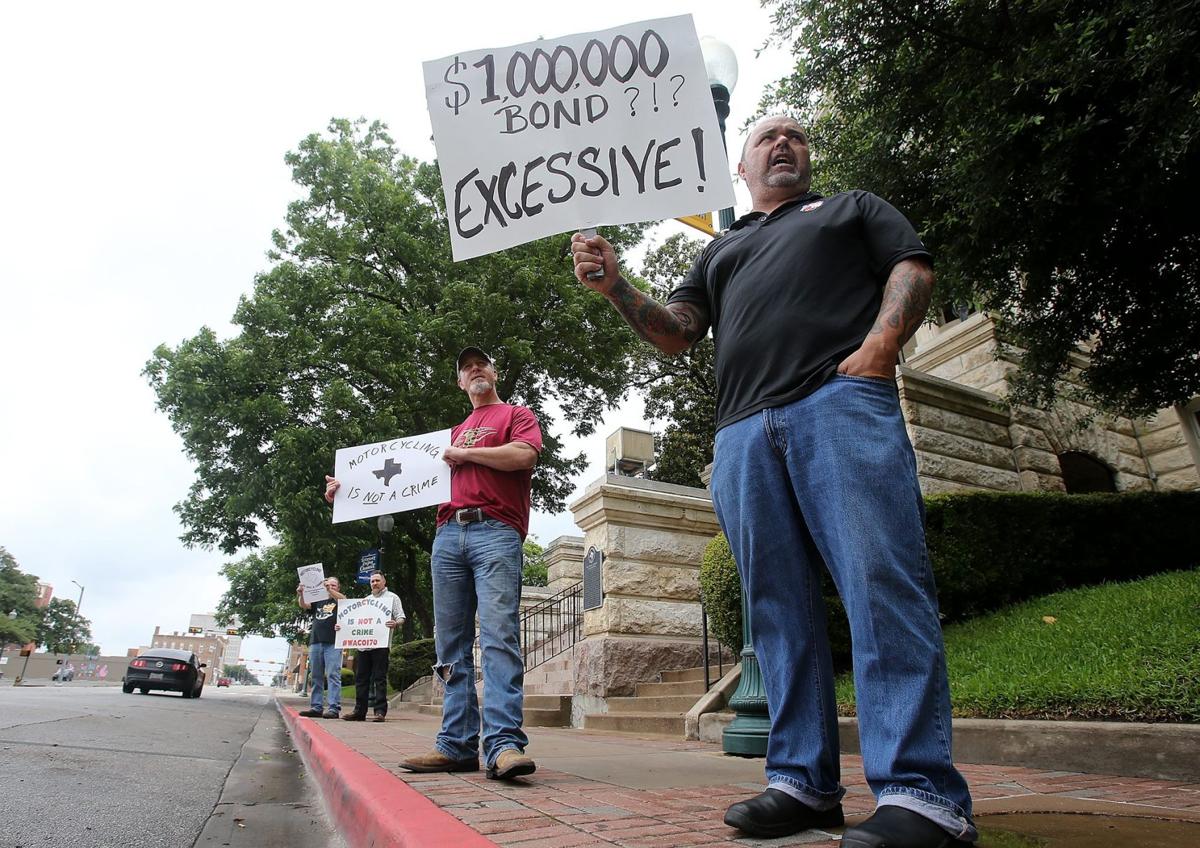 Ferrell Surette, 47, from the Houston area, stands with others outside the McLennan County Courthouse supporting the approximately 170 bikers who were arrested in the Twin Peaks shootings.

Scott Fultz, from the Houston area, stands with others outside the McLennan County Courthouse supporting the approximately 170 bikers who were arrested in the Twin Peaks shootings.

McLennan County sheriff Parnell McNamara (left) has a friendly conversation with Ferrell Surette, from the Houston area, as Surette stands with others outside the McLennan County Courthouse supporting the approximately 170 bikers who were arrested in the Twin Peaks shootings.

Ferrell Surette, 47, from the Houston area, stands with others outside the McLennan County Courthouse supporting the approximately 170 bikers who were arrested in the Twin Peaks shootings.

About 20 motorcyclists stood in front of the McLennan County Courthouse about noon Saturday to protest the arrest of 170 suspects in the Twin Peaks shooting that killed nine people.

Ferrell Surette, 47, said he and other protesters from the Houston area have no motorcycle club associations but know some of those arrested. He said they are “just regular motorcycle guys who happened to be in the wrong place at the wrong time,” referring to the meeting of the Texas Confederation of Clubs and Independents that was to take place May 17 when the violence occurred.

Protesters claimed such meetings have happened regularly for as many as 18 years without problems.

The protesters arrived at the courthouse in pickup trucks and cars and contacted law enforcement about their plans to gather. Many said they were friends from the hot rod community who just happen to also own motorcycles and feel passionate about the issue.

They held signs that read “Motorcycling is not a crime,” “I am not a gang member,” “Due process” and “Free the innocent.”

A few cars driving past the site honked and expressed support while sheriff’s officials, including Sheriff’s Capt. John Kolinek, sat watching from a nearby parking lot.

Ric White, 48, a machinist from Trinity, said most of the group aren’t in clubs because “We just do our own thing. We just like riding motorcycles.”

Frank Ballard, 47, of Plantersville added, “None of us were in book club or drama club either.”

White said he came because he wanted to “heighten awareness of the other side of the story. It’s a chance for those locked up to have their voice heard.”

Sheriff Parnell McNamara visited the group, offering words of support and understanding. He declined comment on the investigation but said he appreciated their peaceful protest.

He called Sunday’s events “very brutal,” adding “These murders that happened this past week shed a very bad light on motorcycle riders.

“Law enforcement knows that there are a lot of good riders not affiliated with these dangerous gangs,” McNamara said. “I’ve got a lot of friends who ride motorcycles.”

Surette said many of the protesters know three of those arrested personally. He identified them as Ryan Craft, 22, of Austin; Jonathon Lopez, 27, of Austin; and Theron Rhoten, 35, of Austin.

“They’re just fellow motorcyclists that were showing up to a conference,” Surette said.

He added that the event was held Saturday because those attending work during the week and that the courthouse was chosen because it is public property.

“We all have jobs and we all have kids we’re trying to provide futures for, just like the guys in (jail),” said Ballard, who said he’s a welder and rides a black Harley-Davidson motorcycle.

“Any one of us could have been in that same place,” White said. “They’re not criminals.”

White called the $1 million bond set on those arrested “way excessive.” He added “The normal, average citizen doesn’t have the money to post a $1 million bond.

He said 99.9 percent of those incarcerated are really good people.

“If they were going to arrest everyone like they did, they should have set the bond lower,” White said.

Defense attorneys in the area who have been hired to represent several of the arrested voiced similar complaints about the bond amount and the sheer number of arrests made May 17 and Monday. Attorney Will Hutson, who is representing Boyce Ray Rockett, 28, of Robinson, said Friday, “You have to have adequate facts to create probable cause. There is no burden for these people in jail to prove their innocence. That’s completely counter to what our system says.”

He added, “If you have said it takes $1 million to keep them there, then you better be able to tell us why.”

Emmett Harris, President of the Texas Criminal Defense Lawyers Association, released a statement Friday claiming that the “unprecedented” arrest of 170 individuals with the same charge and identical bail raises concern for the organization.

“When you consider the constitutional prohibition against excessive bail as well as the requirement for probable cause prior to arresting an individual, the risks of abuse in the Waco case seem obvious,” he said.

Harris added that there is a growing concern among TCDLA attorneys “that the net has been cast too widely and it is probable that not all those being held are guilty of criminal activity.”

Conflicting accounts from Waco police and a clip of a video seen days after the shooting by the Associated Press allegedly capturing moments during the melee inside the restaurant complicated the narrative set by law enforcement, and protestors acknowledged that it isn’t clear what happened inside. White said he’s heard many accounts, noting, “Now it’s a waiting game.”

Police cleared out of the property of Twin Peaks on Tuesday, more than a week after a May 17 shooting that killed nine people and injured 18, …

Welcome to the discussion.

Keep it Clean. Please avoid obscene, vulgar, lewd, racist or sexually-oriented language.
PLEASE TURN OFF YOUR CAPS LOCK.
Don't Threaten. Threats of harming another person will not be tolerated.
Be Truthful. Don't knowingly lie about anyone or anything.
Be Nice. No racism, sexism or any sort of -ism that is degrading to another person.
Be Proactive. Use the 'Report' link on each comment to let us know of abusive posts.
Share with Us. We'd love to hear eyewitness accounts, the history behind an article.

Get up-to-the-minute news sent straight to your device.